BPW Canada has been recognized for its many projects over the years, from the Women’s Empowerment Principles to Equal Pay awareness campaigns and submission of Resolutions including the need to declare Equal Pay Day Nationally, the fight against human trafficking and being a voice for the Indigenous people. Organizations such as the United Nations and other foreign governments from all over the world have acknowledged and applauded BPW’s efforts to improve conditions for all women.  Our mission, vision, values and principles guide us to our ultimate goal which is to improve conditions for all women.

From August 12 to 14, 2016, BPW Canada held its National Convention in Calgary. BPW Calgary delighted in welcoming its fellow members from across the country for a weekend filled with resolutions sessions, workshops and business meetings.

The highlight of the weekend was the Centennial Gala and Awards night with 250 attendees, 10 members of the legislative assembly, a member of parliament and leaders from businesses and civil society.  BPW Canada paid tribute to 100 Organizations across Canada to mark the 100 years of Women’s Suffrage. The gala evening featured a keynote address by Her Honour, the Honourable Lois Mitchell, Lieutenant Governor of Alberta as well as video greetings from Madame Sophie Grégoire Trudeau and Governor General David Johnston. You can watch the video greetings below.  BPW Calgary’s Past President Jenny Gulamani-Abdulla was installed as the 43rd National President of BPW Canada. 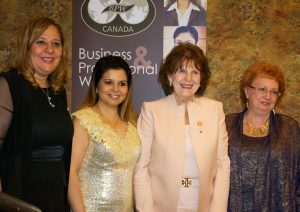