WHEREAS in a global health crisis, such as the COVID-19 outbreak, that requires physical distancing and continuous implementation of safety measures, while essential services still remain operational the health, safety and well being of workers must still be vigorously protected;

AND WHEREAS migrant women are predominantly employed in healthcare, the beauty industry, domestic work and as temporary foreign workers in Canada, where the level of exposure to COVID-19 is very high, where they have to contend with unfavourable work conditions and fear of reporting erring employers so as not to lose temporary residency status in Canada;

AND WHEREAS work sites that gather workers in large numbers such as plants, factories, mills and others expose workers to greater risks;

AND WHEREAS workers have the right to expect adequate safety measures including adequate air filtration systems, testing which include employees who are close contacts of confirmed cases, arrangements to isolate if affected, and compensation to keep themselves and their households safe from COVID 19 and any future health crises;

AND WHEREAS such protection and compensation is not sufficiently provided, that employers and provincial governments would benefit from being involved in collaborative solutions with the federal government;

THEREFORE BE IT RESOLVED that the Canadian Federation of Business and Professional Women (BPW Canada) urges the Government of Canada, specifically the Minister of Employment, Workforce Development and Disability Inclusion, the Minister of Health, and the Minister for Women and Gender Equality and Rural Economic Development to create an independent oversight plan to methodically evaluate worksites that gather workers in large numbers, e.g., plants and factories, to ensure they meet the health and safety standards in light of this global health crisis and to prioritize vaccine access, in addition to what the provincial government is already doing, and to bolster workplace inspections and assessments;

AND FURTHER BE IT RESOLVED that BPW Canada urges the Government of Canada, specifically the Minister of Employment, Workforce Development and Disability Inclusion and the Minister of Labour to devise a system where essential workers may report anonymously any inadequate working conditions that exist in their places of work that put their health, safety and well being at serious risk so that coordinated guidance can be provided through provincial collaboration.

BACKGROUND: Since 1998 BPW Canada has shown support for the International Convention for the Protection of the Rights of All Migrant Workers and their Families.  The Cargill meat processing plant in High River, Alberta has been linked to almost 1000 cases of the novel coronavirus and death of a female worker as well as two male workers of the plant. More than half of the employees of that plant have been affected. This is the largest outbreak connected to a single site in Canada.  The plant is considered an “essential service” and employs 2000 workers, many of whom are female, migrants and members of visible minorities.  The plant handles more than one-third of Canada’s beef packing capacity.

Even before the plant was formally asked to shut down temporarily in 2020, 85% of its workers were saying that they were scared to go to work. The roles and responsibilities of the workers in these types of work environments involve close proximity and physical distancing is not possible.  The lunch rooms, production floors, washrooms and hallways are said to be crowded.  Seventy-five percent of workers felt neither their government nor the employer were doing enough to keep them safe at work.  They did not have adequate equipment to protect themselves while working.  In fact, supervisors received plastic goggles while workers only received flimsy and inadequate masks. More than 3 out of 4 workers felt they were not being compensated properly for the type of work that they were doing as essential workers during COVID-19 and even before the pandemic.

In addition, it is worthy to note that while the pandemic has adversely affected everyone, migrant women are in a more precarious situation.  Many of these workers have temporary resident status in Canada, work in essential services such as healthcare, the beauty industry, domestic work, and in education where their level of exposure to COVID-19 is higher than usual.  Many continue to face barriers owing to immigration and employment laws which bar them from accessing COVID-19 relief, income support wage subsidies and healthcare.

On February 13, 2019, BPW Calgary held a workshop on its resolutions and advocacy work. The purpose of the workshop was to provide our members with a primer on our club’s most important advocacy piece: resolutions and commendations drafting. Our resolutions process serves as means to formally express our opinions to influence policy change at all levels of government with regard to issues affecting women. We work within our Mandate “To improve the economic, political, social and employment conditions for women in Canada.”

Every year, all BPW clubs across the country get to survey their members on the issues that are most important to them, whether improving our equal footing in the workplace, or on the need for government programs that would enhance our economic security, not only throughout our working years but also through our retirement (i.e., childcare, affordable housing, pension reform, among others).  The resolutions committee from each of the respective clubs then selects one or two of these issues to research and bring forward through a written resolution. All of the drafted resolutions are submitted to the BPW Canada Resolutions Chair for review and comment.  Once the resolutions are reviewed, they are then put into final form and are presented at our BPW Canada AGM meeting for discussion and voting.  All voted resolutions are then included in a Brief to the Prime Minister for consideration.  Likewise, though our Commendations, we get to acknowledge the work of the federal or provincial government, as well as other non-governmental organizations, in advancing gender equality in our country.

Resolutions have proven effective in providing our organization with a VOICE on the important areas where we believe the government needs to take action to help us achieve equality in our society. We encourage all of you to learn more about this important work and to consider becoming involved!

We are attaching our PowerPoint Presentation [resources section below] as well as some Additional Handouts that include our Resolution Writing Learning Exercise, a Calendar of Important Events coming up and a List of Further Readings.

The two Commendations acknowledge: the work of the ESS Consortium to address the issue of implicit gender biases in the STEM fields, and the Government of Canada’s agreement to serve as the host country for the 2019 Women Deliver Conference to be held in Vancouver, B.C., this coming June.  The Resolutions and Commendations are attached below. 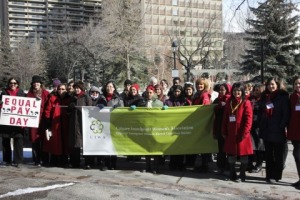 Today women in Canada work an additional 2 ½ months into the next year to earn the same income that men earn doing the same job working just the regular 12 months of the preceding year.  March 18 marks the end of the 420 days that Canadian women must work to earn the same wage that their male counterparts earn in just 365 days.

In 2008, Canadian women who worked full-time, full-year earned $0.71 for every $1.00 earned by men working the same period, resulting in a “wage gap” of 29 cents, which was wider for older women, for disabled women and for women of colour. Despite Equal Pay and Pay Equity legislation, income equity is not a reality in Canada, with women in the workforce still earning only a percentage of what their male counterparts earn – on average, less than 80% according to Statistics Canada. March 18th, 2012 was proclaimed “Equal Pay Day” by the Canadian Federation of Business and Professional Women, and, the Mayor of Selkirk Manitoba, Larry Johannson issued a proclamation to support income equity. Read the Proclamation here (PDF).

Please view our “Community” Section for 2015 initiatives including the Equal Pay Day event at the Federal Republic of Germany and the International Women’s Day March for Gender Equality in New York City during the 59th session of the Commission on the Status of Women at the United Nations Headquarters.

March 18, 2014 – the Equal Pay Day committee and executive assembled 20-25 prominent leaders in a boardroom setting to create dialogue on creating inclusive workplaces with equal opportunity.  Canada’s top diversity employers who promote representation of women in senior leadership roles shared their perspectives while BPW Calgary highlighted the work that remains and the possible way to light an inclusive path to progress.  The attendees comprised of female leaders from a broad range of industries and professions who steered BPW Calgary’s direction to narrow the gender wage gap. Read more about the 2014 event including photos and media coverage on our blog post.

On March 18, 2013, BPW Calgary members, partners and supporters gathered to mark Equal Pay Day near the “Women are Persons” monument in the Olympic Plaza.  The Mayor of Calgary did not proclaim March 18 as Equal Pay Day but did issue a brief letter of recognition.  The former Premier of Alberta sent greetings with a show of strong support.   Read more about the event, including photos and media coverage, on our blog post. You can also check out our 2013 EPD highlight video.