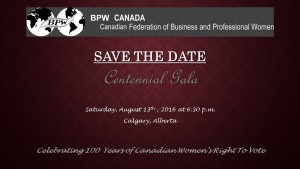 BPW Calgary is pleased to announce that it will be hosting the 45th Biennial National Convention on August 12-14, 2016 at the Clarion Hotel and Conference Centre.  A Centennial Gala will be held on Saturday August 13th at 6:30 PM to recognize 100 Women’s Organizations to mark the 100th Anniversary of Women’s Suffrage in Canada.
In addition to the business portion of the convention, an exciting program is being finalized which includes:
Registration details will follow soon. For more information, visit ttp://bpwcanada.com/en/bpw-events/bpw-events.html