Lieutenant-Colonel Sarah Heer obtained her Masters in Defence Studies from the Canadian forces College.  She is an experienced operational and strategic military leader, specializing in the coordination and synchronization of strategic effects. Recognized as one of the top women in Défense and Security in 2021 and a former Director of Diversity and Human Rights for the Canadian Armed Forces, Lieutenant-Colonel Heer has been a versatile leader of Canadian soldiers in various military positions. She has recently completed the Advancing Women in Leadership Program.

Lieutenant Colonel Heer is the first woman to command on Operation UNIFIER in Ukraine. Learn more as she reflects on the strength of diversity in the Canadian Armed Forces.

Get your tickets here 👉 Event Tickets 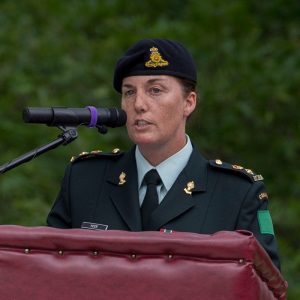