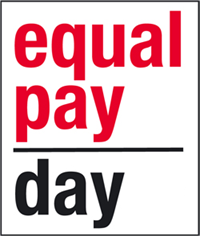 On March 18, 2014 BPW Calgary members, community partners and supporters gathered to mark Equal Pay Day in the 30th floor boardroom located in the West Tower of the Suncor Energy Centre in Downtown Calgary.  Employment lawyers, human rights leaders, researchers, educators, and influential members of the business and professional communities assembled together to applaud the achievements of women in the workplace and reflect upon the work that remains, specifically narrowing the gender wage gap.  Scroll down this page for Photos.

Formally opened by CBC Calgary News Anchor Nadia Stewart, the event was attended at full capacity, with a powerful keynote address delivered by Tasha Giroux, from the Royal Bank of Canada.  Ms. Giroux shared the numerous reasons why one of Canada’s top diversity employers actively promotes the representation of women in senior management roles.  She focused on ways to create an environment that promotes inclusion through access to equal opportunities and progressive work/life and flex policies.  A timeline of diversity milestones revealed that in 1994 the Royal Bank of Canada undertook “Closing the Gender Gap Initiative”.

President of BPW Calgary, Jenny Gulamani-Abdulla reminded the attendees that the club’s goal was to take the campaign from the streets of Calgary last year to the schools and boardrooms this year.  The club donated children’s books on Equal Pay to schools such as the Alice Jamieson Girls’ Academy and addressed various groups on the issue of Equal Pay leading up to March 18.  Ms. Gulamani-Abdulla shared the club’s 16 month local journey which has now turned into a national undertaking through the Resolution process with the support of over 50 clubs to declare Equal Pay Day nationally.  She traced back to the origins of Labour Day, a day intended by Sir John A. MacDonald, to honour what was significant to workers at that time, mostly men.  “Today labour day is about Back to School Sales and Canadian Football”, she said, “Equal Pay is a significant issue for women who make up almost half of the labour force, how can we address it?”

Attendees had viewed the two-panel discussion between President Jenny Gulamani-Abdulla and Professor Richard Mueller on the Gender Pay Gap aired on Alberta Prime Time the day before Equal Pay Day and it can be viewed here:  http://alberta.ctvnews.ca/video?clipId=540393&binId=1.2002989&playlistPageNum=1

The feedback received was exceptional with 89% stating that Canadians are unaware of our country’s ranking of #35 for wage equality according to the World Economic Forum Reports of 2012 and 2013.  86% of the attendees stated that the Mayor of Calgary should have proclaimed Equal Pay Day in 2013.  Unfortunately, this was not possible due to the outdated Proclamation Policy and viewing the issue of Equal Pay as one having a “political overtone”.

Suggestions for next steps included:

(1) Leveraging the power of over 40 clubs across the nation to table this issue at the Prime Minister’s Office to declare Equal Pay Day nationally,

(3) Continuing to build a more vigorous educational campaign to engage employers and corporations, and,

(4) Inspiring the future generation of female employees to move forward with conviction. 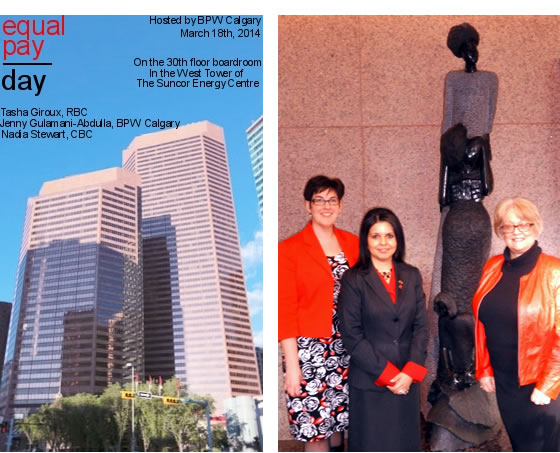