On March 18, 2013, BPW Calgary members, partners and supporters gathered to mark Equal Pay Day near the “Women are Persons” monument in the Olympic Plaza.

END_OF_DOCUMENT_TOKEN_TO_BE_REPLACED 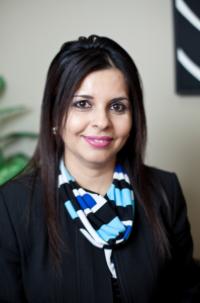 It is with great pride that the Business & Professional Women’s Club of Calgary (BPW Calgary) announces that Jenny Gulamani-Abdulla, President of BPW Calgary, and, Founder of Gulamani-Abdulla & Co., Immigration Consulting, has been named one of Canada’s Most Powerful Women: Top 100 Award Winner. This prestigious award will be presented to Jenny by the Women’s Executive Network (WXN) at a national gala ceremony on December 4, 2013 in Toronto.  There will also be a regional gala in Calgary on March 6, 2014. (For more details about the gala and to order tickets, visit the WXN website.)

The WXN awards celebrate the professional achievements of strong female leaders across the country in the private, public and not-for-profit sectors.  Since 1997, 728 remarkable women have been honoured.  Jenny is receiving the honour for her outstanding executive leadership and contributions to the community under the RBC Champion Awards Category.  She is being recognized for making a distinct and describable difference to the advancement of women in the Canadian workplace by serving as a role model and as an agent of change.

At BPW Calgary, Jenny has made a dramatic impact by strengthening the core programs through mentorship and scholarships. She is a solid advocate for Equal Pay and has reached out to various levels of government, civil societies, educational institutions and the public through media to move forward on the issue of gender wage gap which continues to persist in Canada.   Jenny has led a resolution nationally on human trafficking through BPW Canada to improve conditions for female foreign workers by calling for tighter controls and identifying businesses that victimize women in the workplace.

Over the last two decades, through her immigration practice Jenny has assisted women worldwide to re-unite with their families in Canada by providing access to professional advice at no cost, especially at a time when they have been at high risk and most vulnerable.  Through these various undertakings, Jenny has worked tirelessly to advance issues affecting women.

On March 18, 2013, BPW Calgary members, partners and supporters gathered to mark Equal Pay Day near the “Women are Persons” monument in the Olympic Plaza.  President Jenny Gulamani-Abdulla set the tone by chanting, “Equal Pay, Equal Pay, Equal Pay”. The crowd joined her energetically as she revealed that the Premier of Alberta, Alison Redford sent special greetings with strong support for the day. She also shared that the Mayor of Calgary, Naheed Nenshi, issued a letter of recognition to acknowledge Equal Pay Day.

BPW International awarded a Certificate of Recognition to BPW Calgary in Puerto Rico during the International Congress in recognition for their contribution to the empowerment of working women and their Equal Pay Day efforts.

Alberta Prime Time did conduct a one-on-one interview with BPW Calgary President on Alberta Prime Time on March 15, 2013.  However, this video is no longer available to view on their video archives.  You can view it by contacting BPW Calgary by email at info@bpwcalgary.com  You can still check out the 2014 video at http://alberta.ctvnews.ca/video?clipId=540393&binId=1.2002989&playlistPageNum=1 and view our own 2013 video highlight recorded at the Olympic Plaza https://bpwcalgary.com/news/equal-pay-day-highlight-video-march-18-2013/  Scroll down for Photos of the event.

On March 18, the CBC ran an article about BPW Calgary’s Equal Pay Day event while the Calgary Herald published a photo gallery from the event. 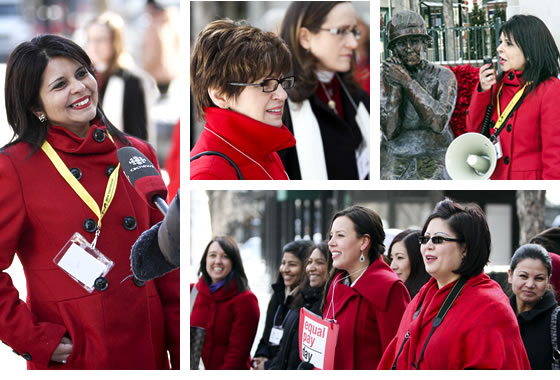 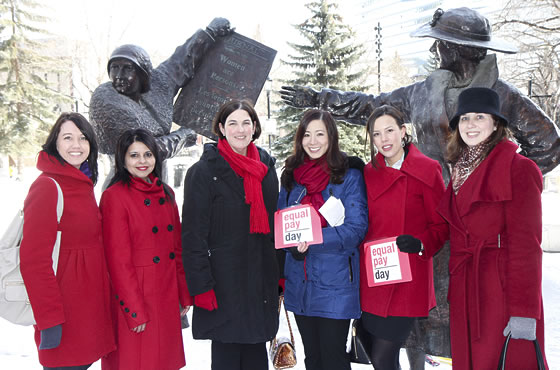 BPW Calgary received recognition by the Federal Government of Canada through Minister Rona Ambrose for launching a campaign in October to mark the World’s first International Day of the Girl… the only BPW club in this nation that was singled out through a media release at the Status of Women Canada.

The evening started with music by Kirsten Collins, Miss Teen Calgary, Canada who wished to use her platform to expose injustices affecting children and was followed by two student presentations: (1) Value of Mentorship by Jennifer Le, and, (2) Modern day slavery by Iman Abdulla. Read more at BPW Canada.

In Canada, it is tempting to say that girls are empowered but it is not that simple. We are definitely shining in the area of education. Women have actually reached or passed equality whether it is primary, secondary, high school, college or university education.

We are also doing well with having reached equality in the proportion of men and women who work. We have a longer healthy life expectancy and the number of female babies born is just slightly less than male so in the area of health and survival, we are outperforming. (See Statistics Canada for the full report.)

But there are definitely areas that need work. For example, we only earn 73% of what men earn for similar work and we occupy less senior level and government positions. So we need to close that gender gap in the economic and political arenas.

Click here to find out about the Equal Pay Day campaign in Calgary.

In Canada, girls have higher rates of depression, sexual harassment and dating violence. In Canada, nearly 70% of victims of internet intimidation are girls and young women, and issues of body image and self esteem continue to remain prevalent amongst girls. This is very disturbing and we will continue to raise awareness and bring attention to these issues through education and training.

Learn more about what it means to be part of BPW. Watch here for an interview with current BPW International President Freda Miriklis!